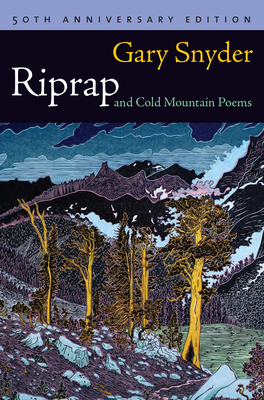 By Gary Snyder
Email or call for price.
Hard to Find

By any measure, Gary Snyder is one of the greatest poets in America in the last century. From his first book of poems to his latest collection of essays, his work and his example, standing between Tu Fu and Thoreau, has been influential all over the world. Riprap, his first book of poems, was published in Japan in 1959 by Origin Press, and it is the 50th anniversary of that groundbreaking book that is celebrated with this new edition. A small press reprint of that book included Snyder's translations of Han Shan's Cold Mountain Poems, perhaps the finest translations of that remarkable poet ever made into English. For the 50th anniversary, this completely redesigned edition of Riprap is accompanied by a CD of Snyder reading all the poems in this collection, with introductions and asides. The recording, made in the poet's home by Jack Loeffler, marks the first time a complete reading has ever been available in a commercial edition. One of the finest collections of poems published in the 20th century, this edition will please those already familiar with this work and excite a new generation of readers with its profound simplicity and spare elegance.

The master of lucid meditation . . . Readers are fortunate to have what Snyder wants to pass on.” Los Angeles Times Book Review

Long ago staked his claim as one of America's finest poets . . . [An] unswerving integrity [is] present throughout the development of Snyder's poetic sensibility.”
Boston Herald

As early as the 1950s, before ecology became a household word, Snyder understood things about our civilization and economy that no one else was talking about, and he wrote about them with great authority and a sinewy line.” Richard Tillinghast, The Nation