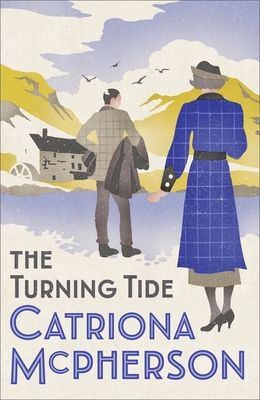 This is book number 14 in the A Dandy Gilver Mystery series.

Set in 1930s Scotland and brimming with eccentric characters and incisive humor, The Turning Tide is Catriona McPherson's best Dandy Gilver mystery yet!

It's a breezy Scottish summer of 1936 and aristocratic sleuth Dandy Silver, along with trusted colleague Alec Osborne, has been called to solve the strange case of the Cramond Ferrywoman, on the Firth of the Forth.
From their cheerless digs in a local stately home, Dandy and Alec track Vesper Kemp, the ferrywoman, to a tiny tidal island. She seems to have lost her mind, roaming the beaches in rags, ranting about snakes and mercury. What is even more troubling, is that Vesper claims she murdered Peter Haslett, a young man who fell into the river, trying to row past ones of its four water mills, and drowned.
A group of worried Cramond residents--the minister, the innkeeper, and the lady of the big house--are determined that Vesper is innocent. But with four local millers themselves remaining oddly tight-lipped and with all the suspicious strangers who lurk about the village, Dandy and Alec have their work cut out for them. And the closer they get to the answers they seek, the stronger the sense that great danger lies beneath the surface of these murky waters.

Catriona McPherson was born in the village of Queensferry in south-east Scotland in 1965 and educated at Edinburgh University. She left with a PhD in Linguistics and spent a few years as a university lecturer before beginning to write fiction. The first Dandy Gilver novel was short-listed for the CWA Ellis Peters Historical Dagger of 2005 and the second was long-listed for the Theakston's Crime Novel of the Year Award 2007. In 2012 Dandy Gilver and the Proper Treatment of Bloodstains was nominated for a Historical Macavity Award. Catriona writes full-time and divides her time between southern Scotland and Northern California.

"The 1930s setting is skillfully evoked and there are shades of Agatha Christie in the plotting."—CHOICE

"McPherson's with has been compared to PG Wodehouse or Nancy Mitford, and her finely researched and choreographed narratives to the work of Agatha Christie... an absolute delight... these are perfect reads for a night by the fire."—Scotsman