Look Out: A Selection of Writings (New Directions Bibelot) (Paperback) 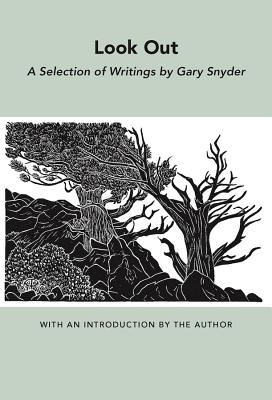 By Gary Snyder
Email or call for price.
Special Order

Personal favorites selected by the Pulitzer Prize-winning poet himself.

Beginning with the publication of The Back Country in 1968, Gary Snyder's long-cherished association with New Directions continued through the publication of his poetry books: the Pulitzer Prize-winning and bestselling Turtle Island (1974), and Myths & Texts (1978), as well as his prose works, Earth House Hold (1969) and The Real Work (1980), all essential titles on the New Directions list. Snyder's No Nature: New and Selected Poems, a finalist for the National Book Award, was published in 1993 by Pantheon, and his long-anticipated epic poem Mountains and Rivers without End was published by Counterpoint in 1997. Snyder has had a seminal place among American landscape writers. "As a poet," he once wrote, "I hold the most archaic values on earth." He has long been associated with Beat writers such as Jack Kerouac, Allen Ginsberg, and other poets such as Kenneth Rexroth, Robert Creeley, and Robert Duncan. His poetics are founded in Poundian modernism, Chinese and Japanese poetry, and ancient oral native traditions.

Look Out is a collection personally compiled by Gary Snyder for New Directions, containing poems and essays from all his New Directions books. It offers first-time readers a chance to see the evolution of his thought and poetry, spanning two decades, and old-time fans the opportunity to behold all the favorites, in a new Bibelot edition. Also included here is Snyder's Introduction, as well as a new poem written about the late New Directions founder James Laughlin.

Born in 1930 in San Francisco, Gary Snyder grew up in the rural Pacific Northwest. He graduated from Reed College in 1951 with degrees in anthropology and literature, and later, 1953–56, studied Japanese and Chinese civilization at Berkeley, returning there to teach in the English Department. After participating in the San Francisco revival, the beginning of the beat poetry movement, with Ginsberg, Whalen, Rexroth and McClure, Snyder quietly went off to Japan in 1955 where he stayed for eighteen months, living in a Zen monastery. In 1958, he joined the tanker "Sappa Creek" and traveled around the world. In early 1959 he again returned to Japan where, apart from six months in India, he studied Kyoto under Oda Sesso Roshi, the Zen master and Head Abbot of Daitoku-Ji. He has spent further time (1966–67) in Japan on a Bollingen research grant. In 1969 he received a Guggenheim grant and toured the Southwestern United States visiting various Indian tribes.