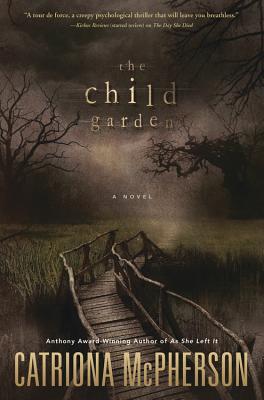 By Catriona McPherson
Email or call for price.
Hard to Find

Eden was its name. "An alternative school for happy children." But it closed in disgrace after a student's suicide. Now it's a care home, the grounds neglected and overgrown. Gloria Harkness is its only neighbor, staying close to her son who lives in the home, lighting up her life and breaking her heart each day.

When a childhood friend turns up at her door, Gloria doesn't hesitate before asking him in. He claims a girl from Eden is stalking him and has goaded him into meeting near the site of the suicide. Only then, the dead begin to speak--it was murder, they say.

Gloria is in over her head before she can help it. Her loneliness, her loyalty, and her all-consuming love for her son lead her into the heart of a dark secret that threatens everything she lives for.

"A tale that shivers with suspense."--The New York Times

"A terrific stand-alone that is complex, haunting, and magical."--Library Journal (Starred Review)

"One surprising plot twist after another leads to a shocking ending."--Publishers Weekly

"Catriona McPherson spins webs of intrigue so beautiful and intricate she puts spiders to shame. With The Child Garden, she once again proves why she has rapidly become a star in the thriller genre...This is a book you will absolutely devour."--William Kent Krueger, New York Timesbestselling and Edgar Award-Winning Author of Ordinary Grace

Catriona McPherson was born in Edinburgh, Scotland, and is the author of several standalone novels for Midnight Ink. She is a four-time winner of the Lefty Award, three-time winner of the Macavity Award, two-time winner of the Agatha Award, and two-time winner of the Anthony Award. Additionally, she has been a finalist or shortlist honoree for more than a dozen major awards. Catriona also writes the Dandy Gilver historical mystery series (Minotaur/Thomas Dunne Books). She is the past president of Sisters in Crime and a member of Mystery Writers of America. She lives in Davis, California.