At Home on the Earth: Becoming Native to Our Place: A Multicultural Anthology (Paperback) 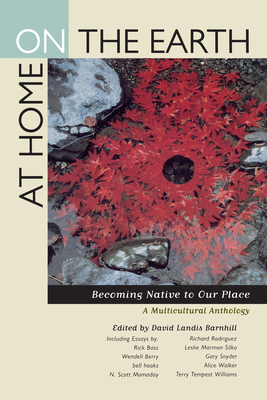 Nature writing, as Thoreau knew, can be deeply subversive because it points to ways of living that diverge fundamentally from dominant attitudes. Thoreau would have welcomed these essays by America's most important nature writers, for in exploring our intrinsic relationship with the earth, they also consider our alienation from nature and how that alienation is manifested.

The book's principal focus is on the possibilities of being at home on the earth: Finding place, reinhabitation, and becoming native.The collection begins with essays by N. Scott Momaday and Leslie Marmon Silko, who accentuate the links between culture and nature. Other essays speak to the loss of place and to being stewards of nature and of bioregionalism, nativeness, and of interdependent communities, be they in rural areas or urban neighborhoods. Several essays address how our current ideologies of growth and individualism run counter to a sustainable relationship to the land and to each other. In the final three essays, Gary Snyder critiques various views of nature, Alice Walker articulates a vision of a responsive universe, and Linda Hogan celebrates the interaction of nature and human habitation. The contributors' views, writings, and contexts are variegated, but all share a sense that human identity is intimately tied to the land one lives on. And as in an ecosystem, the collection's great diversity yields abundant riches.

At Home on the Earth represents the cutting edge of environmental thinking in the United States today. Throughout, the interactions between humans and nature convey a politics of hope, one sustained by faith in place itself. As Gary Snyder writes, "We are all indigenous to this planet, this mosaic of wild gardens we are being called by nature and history to reinhabit in good spirit."

David Landis Barnhill is Director of Environmental Studies and Professor of English at the University of Wisconsin Oshkosh.