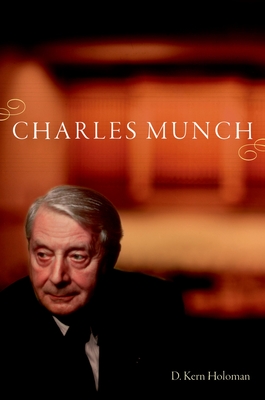 By D. Kern Holoman
Email or call for price.
Usually Ships in 1-5 Days

A mesmerizing figure in concert, Charles Munch was celebrated for his electrifying public performances. He was a pioneer in many arenas of classical music--establishing Berlioz in the canon, perfecting the orchestral work of Debussy and Ravel, and leading the world to Roussel, Honegger, and Dutilleux. A pivotal figure, his accomplishments put him on a par with Arturo Toscanini and Leonard Bernstein. In Charles Munch, D. Kern Holoman provides the first full biography of this giant of twentieth-century music, tracing his dramatic survival in occupied Paris, his triumphant arrival at the Boston Symphony Orchestra, and his later years, when he was a leading cultural figure in the United States, a man known and admired by Presidents Truman, Eisenhower, and Kennedy. He turned to conducting only in middle age, after two decades as a violinist and concertmaster, a background which gave him special insight into the relationship between conductor and orchestra. At the podium, his bond with his musicians unleashed something in them and in himself. "A certain magic took wing that amounts to the very essence of music in concert," the author writes, as if "public performance loosed the facets of character and artistry and poetry otherwise muffled by his timidity and simple disinclination to say much." In concert, Munch was arresting, even seductive, sweeping his baton in an enormous arch from above his head down to his knee. Yet as Holoman shows, he remained a lonely, even sad figure, a widower with no children, a man who fled admirers and avoided reporters. With groundbreaking research and sensitive, lyrical writing, Charles Munch penetrates the enigma to capture this elusive musical titan.

D. Kern Holoman is Distinguished Professor of Music at the University of California, Davis, and conductor emeritus of the UC Davis Symphony Orchestra. He is the author of Writing About Music, Evenings with the Orchestra, Berlioz, and the popular textbook Masterworks.